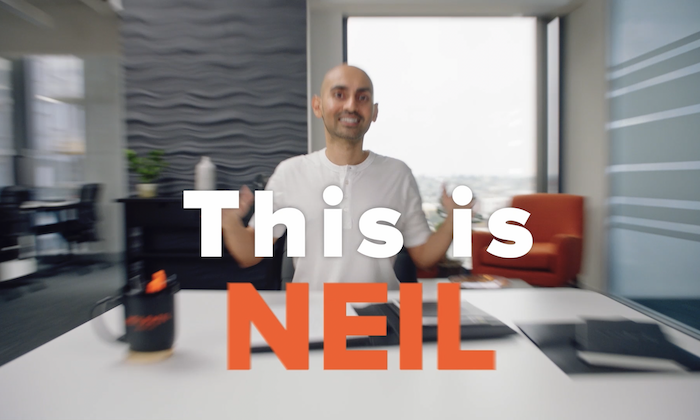 Over the last month (4 weeks) I’ve been running television ads for my company, NP Digital, on CNBC and Bloomberg in the United States.

If you aren’t familiar with those channels, they are stock channels. And to get even more specific, my ads are running during the hours the stock market is open, from 9:30 am to 4 pm eastern standard time.

Now every once in a while, my ads run a bit before the market opens and even a bit after… but that’s roughly the time the ads air. And they only air Monday through Friday which are the days the stock market is open.

Before I dive into how the ads performed, let me give you a bit of background first…

My theory behind running TV ads

Online advertising is becoming expensive. Just look at Facebook and Google, it costs more to run an ad now than it did a year ago.

So why not try something different…

In the ad agency world, people run ads for their clients, but no one really runs ads on TV for themselves (at least in the United States from what I can tell).

So our team decided to take the plunge and give it a chance.

We also felt that it could provide an ROI because as an ad agency we see tons of data. And for many of our customers we are seeing TV ads from a cost to acquire a customer to be a bit more expensive than Facebook ads, and a bit less expensive than Google ads.

Plus, we thought it would bring credibility. Because even though we have 450 employees globally and we operate globally… being 4 or so years old hurts. Mainly from the aspect of bigger brands work with bigger companies.

And even though we have large brands at our ad agency like Adobe or Western Union or Sofi… and we have won dozens of marketing awards for our work, we are still small compared to agencies like WPP that generate roughly $12 billion a year in revenue.

There’s a saying in the business world, you don’t get fired for hiring IBM. The same goes with hiring a big holding company brand like WPP, Dentsu, or Omnicom in the marketing world.

It’s slowly changing though as people care for results over anything else. Especially with marketing.

So my thought was running TV commercials for NP Digital would be great if it could drive leads PLUS help build our brand. Eventually, I want people to say “you don’t get fired for hiring NP Digital”.

The commercials were shown randomly on those 3 channels and had close to an even rotation over the course of the 4 weeks.

By having our URL at the end we were hoping for more website traffic and leads as well as branding.

I personally thought the ads were clever, funny and the quality of them made us look like a large agency.

One thing to note with the ads is not everyone was bald. We had a woman wear a bald cap and we had a few men also wear a bald cap. Just so everyone could look somewhat like me.

Well here is an example of one of the weeks:

My cost per visit was roughly $69.11 which is expensive.

The number of leads we could tie from the TV commercial was a whopping 0.

But, we did see our brand queries go up.

In essence, they were working from that end, in which people would watch the commercial then search for “NP Digital” on Google and head to our site.

But again still 0 leads from at least what we could tell, but again the tracking wasn’t perfect.

On a brighter note, though a lot of my friends messaged me saying they saw my commercial.

We even had someone email us saying “bloody amazing commercial”. They weren’t interested in our services, but it was nice to at least get that email.

Would I run TV ads again?

For us though, it wasn’t the most effective.

But here is what’s funny. I am still going to run them. I want to try it out for 11 more months and see what happens.

I’m a big believer in branding.

Just thinking about shoes… you wear Nike not because of a Google search, you just know their brand.

The same goes with Visa, BMW, Louis Vuitton, and even Lululemon.

Branding is priceless and if you want to be a big business you have to invest in it.

Here’s a quick stat for you, did you know that more people search for “Nike” in the United States on Google than they do for the word “shoes”? That’s the power of branding.

My goal, or more so “hope” is that after a year of burning $1.2 million more people will recognize us and see us as a serious contender. And it will help with the rule of 7, in which when companies see or interact with your brand 7 times, they are more likely to evangelize it and sign up as a customer.

Another thing I am going to try is adjusting the hours the ad is run and maybe even the channels.

Eventually, I will adjust the creatives and try new ads, but I will continue to run the 3 above for at least another quarter or two.

If you want to be a big company, you have to build a brand.

Brands are priceless. Your brand is what’s going to get you more business in the long run.

Now that doesn’t mean you have to run TV commercials like me to build a brand, you can use any channel you want. From SEO to social media to TV… the possibilities are endless. Heck even building an amazing product or providing an amazing service helps build brands.

The next time you make a purchase ask yourself why. The chances are because you are familiar with the company’s brand.

59% of consumers prefer to buy new products from brands they are familiar with.

And of course, if you need help with your branding, check out my agency. 😉

What are your thoughts on my TV commercials?