What Is the Average Full-Stack Developer’s Salary? Fresh Data for 2021 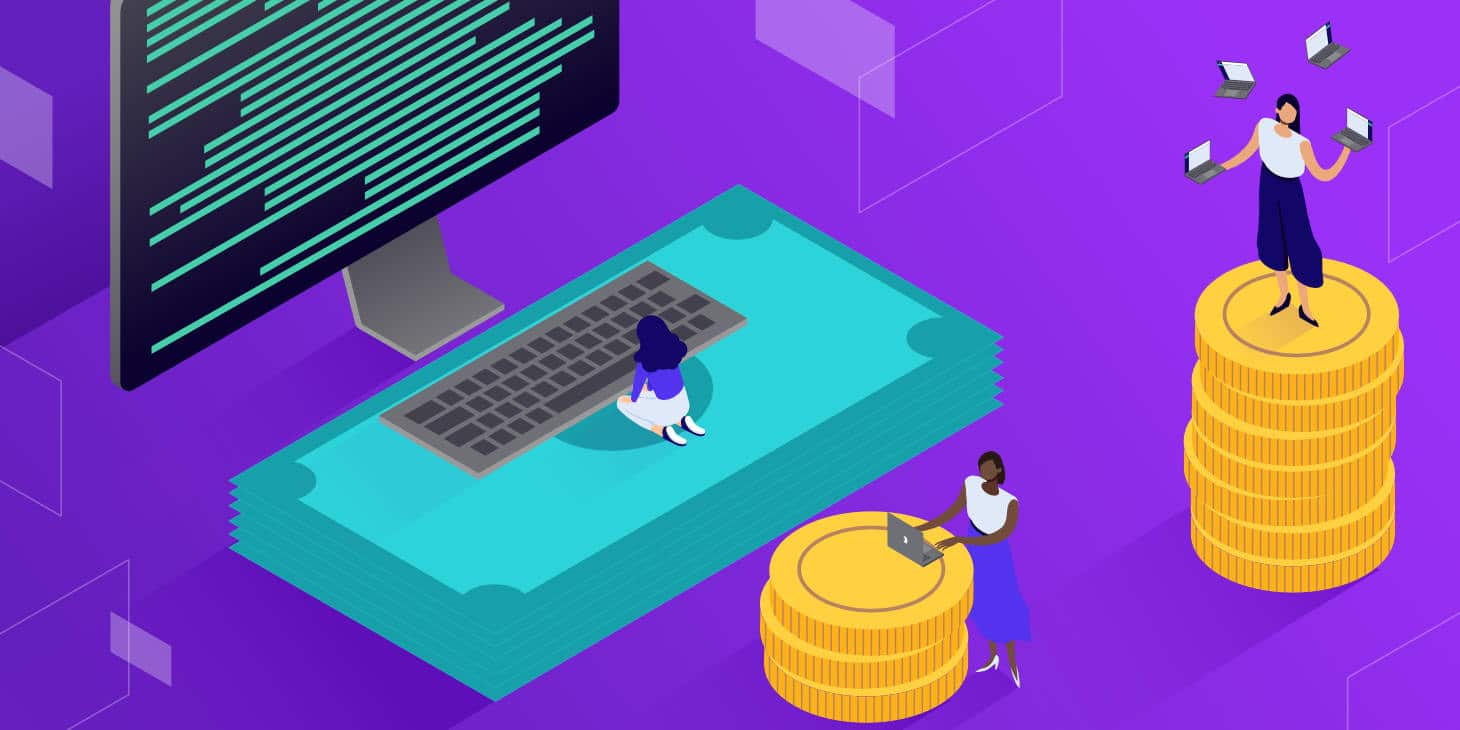 What Is the Average Full-Stack Developer’s Salary? Fresh Data for 2021

Is a full-stack developer salary worth the effort? How does it compare to other developers’ wages? And what will your job responsibilities be if you choose to take on this uncommon profession? We’ll answer all this and more now.

What Exactly Is Full-Stack Development?

Generally, a website comprises two parts: the frontend (client-side) and the backend (server-side).

The front end is what you see when you visit a site, and it includes HTML, CSS, and other languages like Javascript. While web designers are often responsible for the finer artistic aspects, developing a front end still requires being detail-oriented and balancing function and beauty.

As for the backend, this includes all the operations going on invisibly in the background. A variety of languages like PHP, Ruby, and Python, and the various frameworks that go with them — though, backend developers tend to specialize in a select handful.

Many backend developers are also responsible for managing the database and debugging any server-side issues that may occur.

However, that doesn’t mean full-stack developers make front or backend developers obsolete, and you certainly shouldn’t expect to be fulfilling large projects all on your own. Full-stack development is a less specialized job, but it means you’re familiar with every step of web development.

On the other hand, spreading your skills across a wide area means you’re often missing out on developing crucial skills, or half of your skillset may become unbalanced as you focus on specific areas.

Still, being a full-stack developer has enormous advantages as it makes you highly flexible and able to work on different parts of a project as needed.

What You Need to Become a Full-Stack Developer

Due to its unspecialized nature, becoming a successful full-stack developer can require more time and work than choosing a different technical field. When something goes wrong, people will naturally turn to you with your vast array of knowledge. It can take a while to acquire these skills.

But like all developer jobs, becoming an expert is much more about direct hands-on experience. It is possible to teach yourself to be a full-stack developer with only online resources.

A computer science or related degree can help you get your bearings and quickly pick up new skills, but actual full-stack experience may be valued more by employers and land you a job even if you don’t have a degree. Your best bet is to check job listings in your area and see the open job requirements.

All told, here are the most common job requirements of full-stack developers:

While you may have a broad skill range, your employer shouldn’t expect you to do two people’s jobs. Double the skill does not mean double the workload. Unless you’re making a minimal website, you won’t be in charge of everything!

But your day-to-day job responsibilities may change for different areas of the project. Here’s a list of what you might be expected to do:

Whether full-stack developers have a good salary or not only matters if people are actually hiring them.

Many people choose to hire separate front and backend developers, and you may pursue such jobs and wind up sidelining your extra knowledge. So how likely are you to end up with the job title “full-stack developer”? Let’s look at the trends.

In 2020, LinkedIn released their Emerging Jobs Report, where “full-stack engineers” are listed for the second year in a row. The report even states that growth for this job has increased by 35% every year since 2015.

This data reflects a growing demand for full-stack developers — not necessarily more than specialized workers, but it does mean you should be able to find work with little difficulty.

And while your mileage may vary, it’s always a good idea to take a look at your local job listings and see how much demand there is for full-stack developers in your area. In the end, being able to find a job in your area (or remote work you’re qualified for) relies on more than just these statistics.

The salary of a job can also reflect how in demand that position is: the higher the salary, the more valued you are as an employee, and the less likely your profession is to be oversaturated with other people competing to get hired.

Becoming a full-stack developer means forgoing specialization in favor of picking up as many skills as possible. Even so, your knowledge won’t be shallow; full-stack developers are often referred to as “unicorns,” similar to designer-developer hybrids because their skills are so expansive and rare.

It’s certainly not an easy path. But is the pay worth the effort? Or, salary-wise, would you be better off going for a simpler job that’s easier to take on?

Averaging all this data, you get an annual salary of $97k/year. Certainly not bad, but how does this compare to other related jobs?

Full-Stack vs Back End Developer Salary

Backend development is more complicated than frontend (or client-side) development, mainly because there are just so many languages and frameworks you need to learn. Many of these languages can be extremely difficult to pick up.

As a full-stack developer, you won’t end up touching on many of these narrower points of web development. So how do the salaries compare? 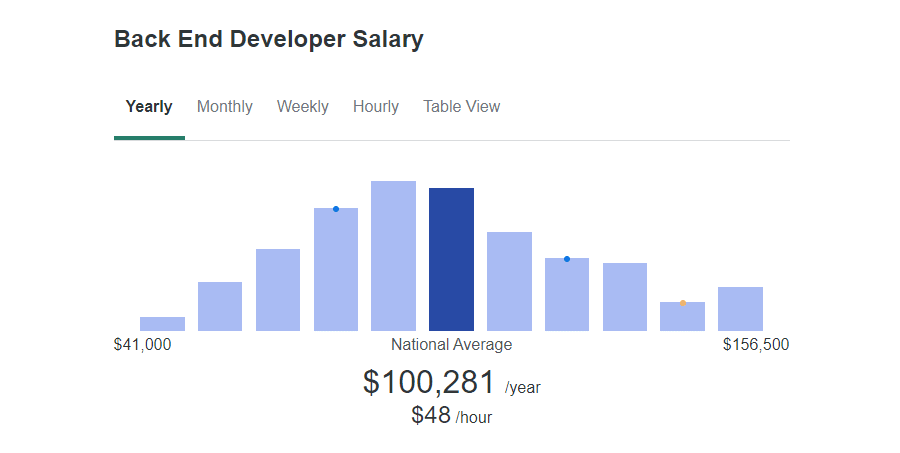 Put these together, and you get an average of $95k/year for backend developers, while full-stack developers get $97k/year.

While you do earn a little bit extra when developing full-stack, it’s not all that much more compared to your standard server-side developer.

Frontend developers notoriously get the short end of the stick money-wise, simply because HTML and CSS are more straightforward for new developers to learn, so there are always many fresh faces competing in the job market.

What are the salaries looking like for frontend developers compared to full-stack developers?

Average this, and you’re looking at $87k/year. Compared to full-stack developers’ $97k/year, that’s a whole $10k less. If income is one of your primary concerns, it’s best to go for backend or full-stack development.

Relevant: Check out our report on the average WordPress developer’s salary to learn if specializing in WordPress is worth it.

Experience can make a big difference to how much you get paid, but some jobs are better than others about earning you a better salary as time goes on. By the time you reach senior status and have several years of experience, how much can you expect to earn?

First: entry-level full-stack developer salaries. Can you make a livable wage in your very first year in the industry? Let’s look at the numbers: 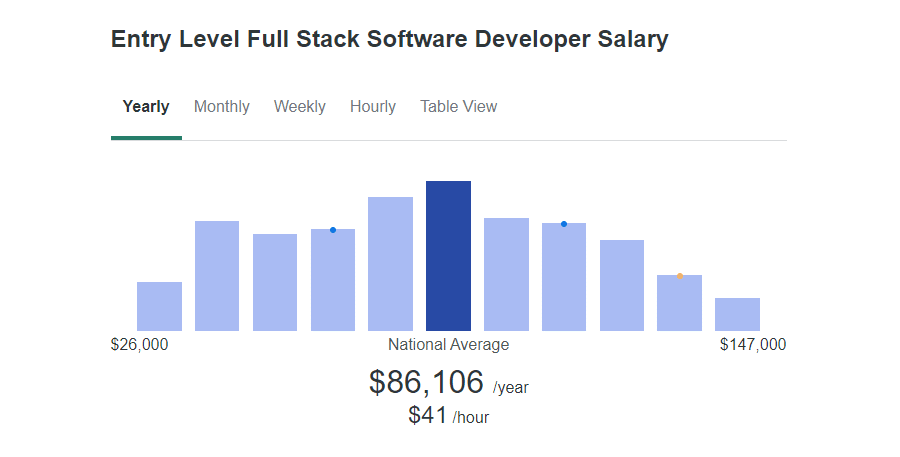 So you’re looking at potentially $80k per year, though it seems that the salary distribution varies widely in the first year. It all depends on whether you can land a good job or choose freelance developer work — whether you can find enough work to support yourself.

As you gain more experience, you continue to earn more money. PayScale reports that early-career full-stack developers can make $75k/year, with this upping to $92k/year when you reach mid-career.

Finally: senior full-stack developers. When you’ve reached your late-career stage and are heading projects and training others, will the work you’ve put in be worth it? 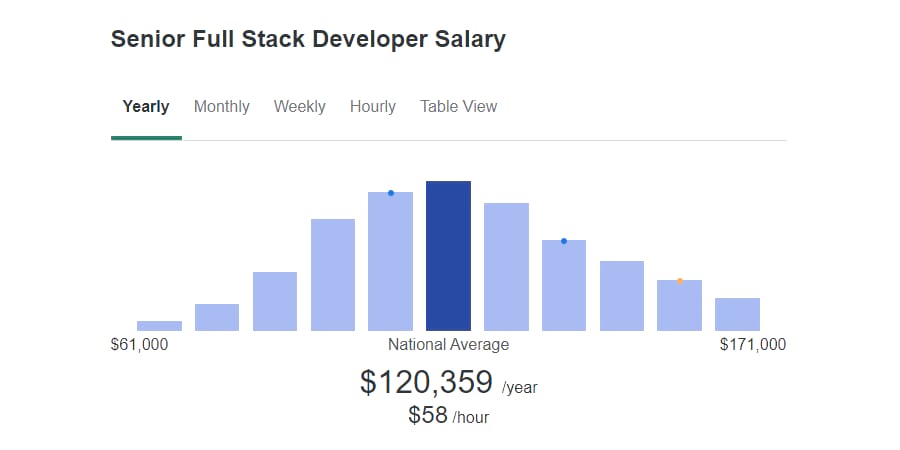 It comes out to a final estimate of $117k/year. That’s not a whole lot more than the overall average of $97k/year, but with the entry-level salary at $80k/year, you’ll end up earning nearly $40k extra throughout your career.

Freelancing can be a considerable time and money sink… or it can be the best choice you ever make for your career.

On the one hand, you get to set your prices, which means you can earn much more than you would on a fixed paycheck. On the other hand, how much money you get is entirely dependent on your ability to attract clients.

But if you can manage to earn enough money to thrive on freelancing full-stack work, here’s the salary you can expect. 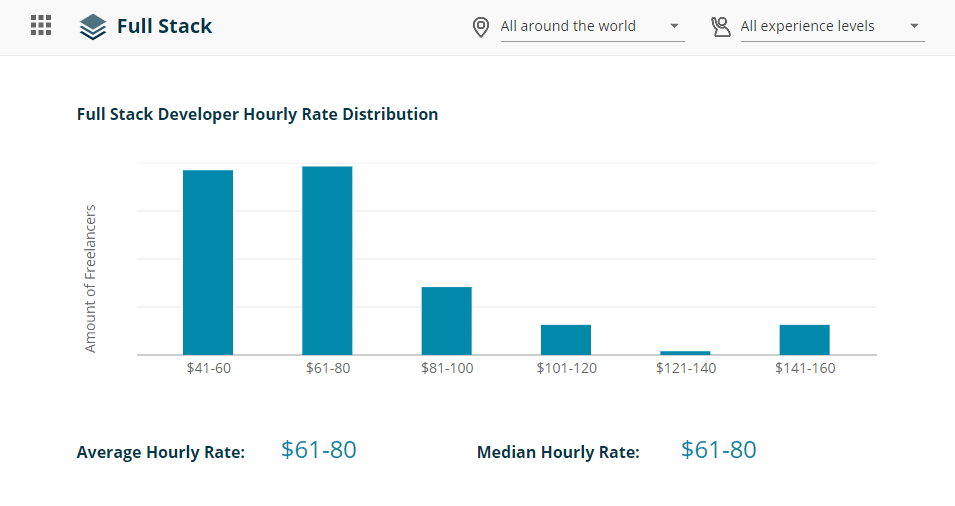 There isn’t much data on this position, but in general, it looks like successful freelancers can expect to earn more on average than all but the most experienced developers. While it’s not for everyone, it’s worth considering.

Where you live can make a big difference to your income. If full-stack developers are less common in your city or country but just as much in demand, you could end up with a highly high-paying job. On the other hand, some countries may pay far less than the average.

Here are some top countries where full-stack developers are currently in demand:

Is It Worth It to Become a Full-Stack Developer?

With an average salary of $97k per year, starting at $80k/year in the early career and moving up to $117k/year as a senior, money concerns aren’t a problem. You’ll be making just as much if not more than similar fields. If that’s all you’re worried about, you should be fine pursuing this job.

You will likely make more than your typical web developer, but only by a hair. So if server-side scripting is your dream job, and you only want to take up the “full-stack” title to earn a little more, it may not be worth the extra effort.

Many full-stack developers say they end up focusing a majority of their effort into backend development anyway. While the knowledge of the client-side can undoubtedly help, it may be better to specialize.

It all depends on what you want. Would you rather have an expansive general knowledge of creating a website, which can help when issues arise in a project? Or would you rather heavily specialize in either front or backend coding and learn as much as you can in these narrow fields?

With all these jobs having very similar salaries, in the end, it’s best to go for what interests you most as a budding developer.

Full-stack developers are a rare class that, on average, earn $97k/year. While you’re making a little more than similar jobs, other types of developers manage to just about keep up in the salary department. So you may have double the skill, but you definitely will not earn double for your trouble.

This job comes with its own unique set of issues as well. It’s more challenging to master due to its broad scope, and while general skills in all areas can help, especially for debugging, it means you lack specialization for really tough problems.

You may also encounter employers who don’t understand your role and hire you, expecting you to do all the work for nearly the same pay.

If you go into full-stack development solely to make more money than other types of developers, you’re likely to be disappointed. But if you like the job description and think you can succeed in this unique role, becoming a full-stack developer could be the right fit.

What are your thoughts on these salary levels for a full-stack developer? Let us know in the comments section!

If you enjoyed this article, then you’ll love Kinsta’s WordPress hosting platform. Turbocharge your website and get 24/7 support from our veteran WordPress team. Our Google Cloud powered infrastructure focuses on scalability, performance, and security. Let us show you the Kinsta difference! Check out our plans

Personal Branding: What is it, Examples & Strategies For 2021
How to Adapt Your SEO to Google’s Core Web Vitals and Core Update [FREE WEBINAR TODAY]